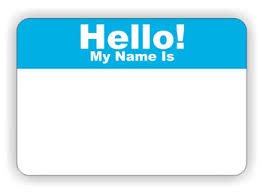 As many of you know, my name is not actually Edwina, it is Judy. I used Edwina due to wanting to remain anonymous when I first started out in blogging (all of 7 months ago). At the beginning of this year I decided  I was brave enough to use my own name.but I have kept the blog name the same as I like it, and some people still address me as Edwina anyway which is fine by me.

I am pretty partial to giving little pet names to some of my family members anyway – even my mum! I call her ‘Peg’ and have done for many years as I thought her teeth looked like pegs! Not very nice I know, but she doesn’t mind, even when ex-boyfriends have mistakenly called her it, thinking it was her name!

Miss Hap I call ‘Beauty’ or ‘Cinderella!’ She hates it when I dare to do it in front of her friends, but she is my little princess and that is that! The poor dog gets called ‘Roxy Roo’ or ‘Poxy’ by my elder sister! Mind you I call her ‘Willow’ after ‘Willow The Wisp!’ My daughter calls her ‘Gingerella’ or ‘Aunty Ginger’ for obvious reasons!

Mr Grump I normally call ‘hub’ or ‘Victor’ when he is crabby (after Victor Meldrew), along with ‘Mr Selfishness’  when he dares to buy himself anything (especially if he hasn’t got me anything)!

Yes I love nicknames. My nieces both over 25 years old, still get called ‘Buffle’ and ‘Boof’! Silly little made-up names that I thought suited them when they were little! One of my nephews I named ‘plumptious’ (he is 23)!

Do you like your name or do you use a nick name?