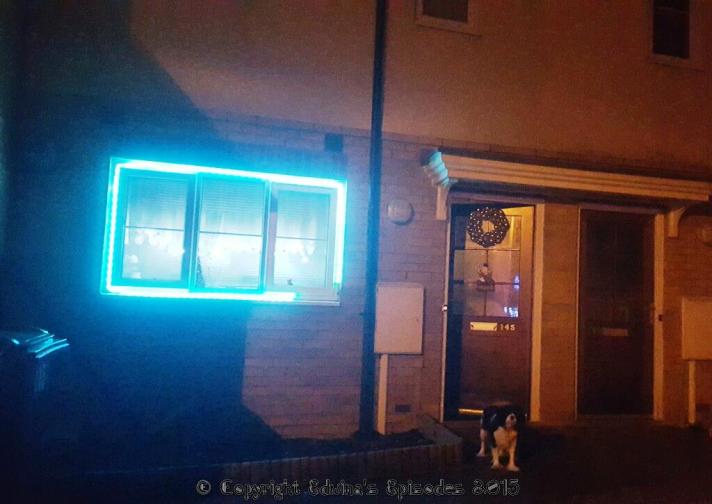 I might have mentioned before that I live on quite a large square. There are 7 houses along each little row with parking spaces in the middle. It is not a huge area, and I have been here for 12 years since Miss Hap was three months old.

Most of my neighbours have been here for the same amount of time, with a few exceptions of some ‘newcomers’ that have been here for a couple of years. It is surprising though how little I know about any of them. I tend to nod or say ‘hello’ to some of them in passing, and sometimes even have a little chat, but that is about it.

I have written all my Christmas cards out, except for the few that I give to the neighbours. Problem was, I didn’t know half of their names or those of their kids, which resulted in a quick text to Miss Hap (who was having a sleepover at her friend’s) to ask her to fill me in which she did.

Me and Mr Grump had to pop out this morning, but I was not feeling too good at all. My head was all over the place and I didn’t want to go out, but I did and quickly dished out a couple of the cards I had written giving the rest to Mr Grump to give out.

I moaned at him when he got to the car thinking he had pushed one through the wrong letterbox, but he hadn’t. That was me, I realised. I had given a card to next door that was meant for someone else! Embarrassingly, I had not written them one at that point either as they were the ones that I didn’t know all of their names as they had only been there for 2 years! The ones whose card it was have lived in the same house for twelve years and their daughter grew up with mine, being good friends!

As it was, one of the cards I put the house number, as nobody knew the name of the family, despite us always saying hello and them coming round to pick up parcels that we take in if they are out when the postman comes.

Just before dinner tonight, there was a knock at the door and I could hear Mr Grump laughing and talking. When he came in he had a card with him and a box of chocolates. I opened the card but was none the wiser when I saw who it was from, as I didn’t recognise any of the names. It turns out it was the family we had taken parcels in for, thanking us for it with the gift.What a nice thing to do.

I still feel bad that I didn’t have a clue what their names are though!