I missed Linda’s Stream of Consciousness yesterday, but I thought I would sneak it in today and hope I don’t get told off! Anway, today we are to start with a contraction, and get a few brownie points if we end with one as well,  so here goes.

I’ve just come back from a night away with Mr Grump. It was our first night away together since we got married six years ago. My Mum stayed over at our house to look after Miss Hap and Roxy and Grump and I set off around 10 am  to get to our final destination of Ham, Sandwich!

The weather was wet and grey but it didn’t dampen our spirits. We stopped off in Hythe and had a massive brunch which would set us up for a while, and poked around in some of the pretty boutique shops they have there.

Next stop was Deal but we passed Dover Castle on the way. It looks pretty imposing on top of the hill but I still didn’t manage to do it justice in my photos! 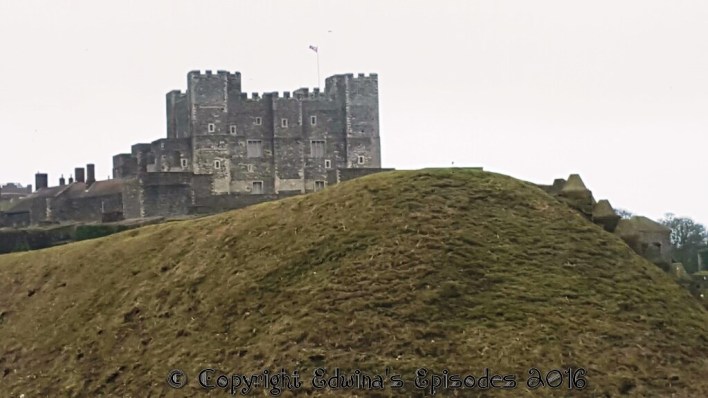 In Deal we found some more lovely shops and the first one I went in I found a lovely dress which I had to have! In the last shop we went to, it looked more like a little house. Once we finally managed to locate the doorway, we walked into an Aladdin’s cave. There were sparkly jewels in the shape of skulls and Lizards, wonderful long, satiny dresses with lacy panels, the coolest men’s shirts I have ever seen with all kinds of patterns on them,  guitars, musical notes, Union Jacks, bright colours and multicoloured buttons. The owner of this shop was a little man with a beanie hat on that was sat behind a counter almost buried by yet more goodies, sequinned hats. floaty scarves, that were draped all around. We had shown an interest in the coats that were there but there was so much stuff, I didn’t know where to look., with He told us that he had a downstairs too and pointed to a small spiral banister-less stairway that led downwards. We gingerly made our way down just as another couple came into the shop.

There were racks of dresses and shirts down there too jam-packed into every crevice which left about 2 meters left to walk on. This was a bit awkward when the couple and shop owner came down as the male half of the couple was about 6ft tall and pretty wide! WE kind of danced around each other and Grump and I decided to go back upstairs which of course I managed to fall up! We checked out the coats again and the owner told us he was knocking off some money as it was his ‘winter stock.’

He picked out a brightly coloured coat for me which I already had my eye on and gestured for me to try it on. Of course, as I put my arms out to get them into the coat I whacked the mannequin he had nearby, displaying a gaudy had and some necklaces. He looked a bit askance when I apologised again for being clumsy, but the coat was a perfect fit! I loved it! To me, it was like Joseph’s technicoloured Dreamcoat with the bright colours.

As you can tell, I bought the coat. We went to the hotel and settled in and ate yet more food. I tried to go for the healthy option but there was none, so I didn’t! Look at the size of Mr Grump’s steak here, it was an inch and a half thick! 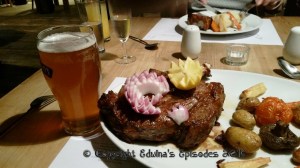 We had a lovely day and had a huge breakfast this morning before we left. In fact, we had so much to eat the last couple of days that my poor tummy is protesting! In fact, we cancelled the carvery we were going to have today as much as I might want it, my body certainly doesn’t!