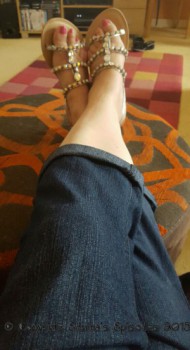 Episode 475: Kicking Back and Letting Go.

What a week this has been! My routine oriented, working patterns, all arse-about-face! Two night shifts in a row is pretty alien to me, and I had one hell of a job sleeping the next day (particularly when my neighbours had a row outside my bedroom window and she kicked him out, hurling insults after him as he roared off in the car).

Unfortunately, I notice that he has returned to the matrimonial home, but must be keeping a low profile as there is none of the usual shouting (or even singing) at the top of his voice for our ‘entertainment!’

The second half of the week saw me get the job that I had applied for. The preparation and research that I did through sleep-deprived, half-closed eyes paid off, and my confidence, and self-esteem got a much-needed boost. I did it!

Friday saw me back at work, and even the fact that there were only 6 of us looking after 26 patients did not dampen my spirits, as the team that were on shift are brilliant. It is going to be so difficult saying goodbye to them, but in the last year alone 16 staff have left with a few others are to follow soon. I know I am doing the right thing as conditions are not going to improve,

The other change that I made is that sadly, I no longer write my ‘Wacky News Stories’ for the magazine, as they were looking to change direction. I could have stayed and written more serious stuff, but as I was also doing some editing and uploading articles from three other writers,  I found it all too time-consuming and I do not like to do things half-cocked!

Today It was out to get Miss Hap some new school shoes and other bits that she needed as they go back on Wednesday; (I have got the week off so actually get the other two days to myself)! As both Miss Hap and Mr Grump are out, I put my feet up and had a much-needed nap!