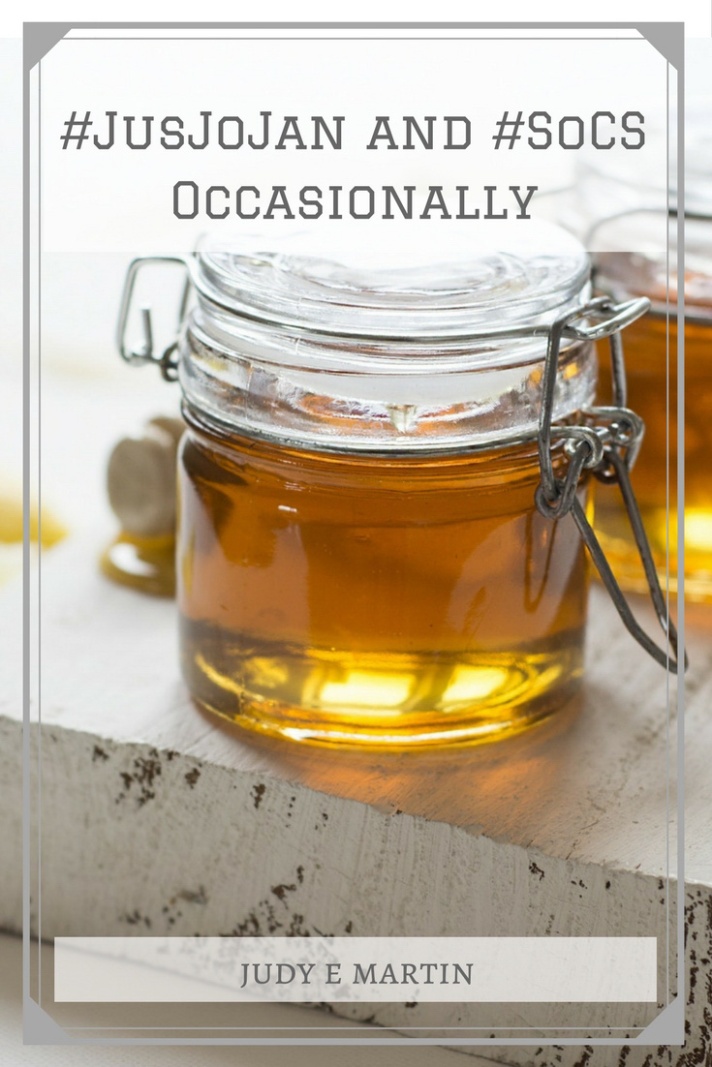 Linda’s Just Jot it January and Stream of Consciousness post for today is a little different as you will see from the rules below. I always enjoy a challenge and look forward to seeing where this post goes.

Your prompt for #JusJoJan and Stream of Consciousness Saturday is: “oc.” Find a word that starts with “oc” and use it in your post. Bonus points if you start and end with your post with an “oc” word. Have fun!

Occasionally, I struggle to think of something to start me off with these posts. My poor brain is still a little fogged with this horrendous cold that I have which doesn’t help either!

I have got my fan on full blast pointing at my face to try to cool myself off as I feel I am coming up to the boil and will spill over if not careful. Having said that, in a few minutes I am sure I will get freezing cold, put my dressing gown on and wrap up in a blanket! Still, at least I am not delirious and am hopefully making sense!

The full might of what I thought was just a horrendous cough and sore throat has now hit, and I have the snotty, sneezy nose to go with it and the aching bones too. As you can tell, I am feeling pretty sorry for myself. It doesn’t help that I have not slept properly for the last few days either so I am feeling a bit crabby, to say the least.

No bonus points for me either as I am fresh out of ‘oc’ words to finish up with.

Oh, my nose is so drippy

And my throat is all scratchy and sore

I am constantly sneezing

And my nose has been wiped till it is raw

One minute I’m cold and all shivery

The next I am a raging inferno

And I’m performing a fevered striptease!

I’ve had enough of this cold now

And being all sniffy and snotty

Instead of looking and feeling so grotty!

Hopefully, it will be gone soon

As it has been hanging around for too long

It is time for it to move on now

And bugger off to where it came from! 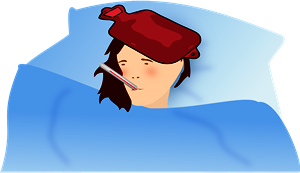 Off To a Great Start!

There must be something about Monday mornings that my body doesn’t care for as I woke up feeling lousy! Now, I didn’t have to be at the offices (which as it happens are a 10 minute walk from my house) until 9am, so that in itself is a major bonus, giving me both a lie-in and a pleasant walk.

Too bad ‘the virus’ decided to make a comeback, determined to finish what it had started only a couple of weeks ago! Oh yes, and just to mix it up a little. let’s throw in a few really large mouth ulcers so that not only will I be talking in that nasally twang, you get with a snotty/bunged up nose, but  my words will be distorted and garbled as well due to my sore mouth!

Anyway, I got through yesterday, not too badly, apart from nearly spontaneously combusting in the training room as I was so hot. Luckily they turned up the air conditioning (yes, it is a new office building), and I tried to ignore that people behind me were reaching for their cardigans and coats! I sensibly, came home, dosed up on tablets and had an early night.

Today, I felt  worse but had the knowledge that I was in for an early finish due to having a full day extra training on Thursday along with a few other clinical staff. I had the grace to keep my snotty tissue in my hand though and try to control my sneezing when we covered the segment regarding infection control!

Not a great start to my new job but at least it should have cleared up before I go out and see my patients!

Poor old Mr Grump has got the flu and I am the one suffering for it! He came home from work yesterday sneezing his head off, complained of aching all over and was generally whining and moaning! Luckily I packed him off to bed early with a cup of tea and Lemsip, and told him to get a good rest, whilst I had a bit of peace and quiet downstairs.

When I went up to bed he was still awake, sneezing, and snotty. The dog was snoring her head off , and just as I thought, no-one got a good sleep (well Roxy did actually)! This morning’s wake-up call was Roxy doing her usual licking Mr Grump’s bald head as it was 6.30 and time for her walk.

I was sleepy but took one look at Mr Grump’s bright red nose, and swollen eyes huffily got dressed and took Roxy for her walk. Once I got back and fed the dog it was then the ordeal of waking Miss Hap up for school (they went back yesterday).Mr Grump appeared in his dressing gown looking pale and weary having phoned in sick at work.

I finally got Miss Hap off and thought I would have a really lazy day today sorting out my blog and doing other bits as I had planned but oh no, Mr Grump plonks himself down on his chair.

I told him to go to bed, but no, he wanted someone to witness his suffering and I was the unlucky one! I was catching up with some blogs when out of nowhere  came

“ATISHHHHHHHOOOOO!” It made me jump out of my skin and I was none to happy when this was repeated at regular intervals ruining my concentration!  He still wouldn’t go to bed, but did stuff a tissue up each nostril to stop the dripping and hopefully sneezing,

By now I was to do a bit of knitting so sat down to watch the TV whilst I did so. I was mad as the channel had seemed to have morphed from Crime & Investigation (which I love), to one which was showing NCIS (although I do like this, I was in the mood for a bit of ‘how to bump your husband off’ type crime)!

I ended up having a nap. Then I had to cook dinner (3 separate meals as well)! This is supposed to be my week off. He always does this when I get a bit of time to myself, so I told him he had better hurry up and get better!

Are you sympathetic to man ‘flu? 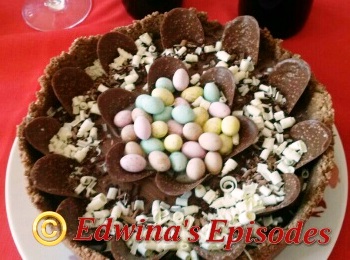 I had really been looking forward to going to my sister’s today. I had a little nap before we went, as I slept very badly last night due feeling really rough with this bloody cold.

We picked my mum up on the way and everyone else was already there when we arrived. Lunch was a beautiful roast beef and yorkshire pudding. We had a cake that my sister had made for pudding which looked so good I took a photo of it!  Not only did it have mini eggs and chocolate orange segments, it also had Nutella in it! I just had to have a little bit of it to try and it was even better than it looked (if that us possible).

Anyway, the fever kicked in again after lunch, and as Mum felt tired, I ended up coming home early. Miss Hap, bless her, wanted to come with me as well to look after me (plus she didn’t want to walk home later as I had the car)!

We are now enjoying a ‘Carry On’ film fest in our pyjamas.  Every Bank Holiday they seem to put them on back to back. I grew up with these films, but never get tired of watching them. The silliness of them as well as the innuendo and double-entendres still make me laugh my head off! Good job I am easily pleased!

Just as I thought, the muzzy head and tickly throat had festered overnight and I awoke this morning at 5.15 when the alarm went off feeling absolutely rotten!

Last night was another virtually sleepless night (fourth in a row). I thought that in my exhausted sleep-deprived state, I would collapse into bed where I would sleep soundly all night. This of course was not to be. As soon as I entered my bedroom the heat hit me, like walking into a greenhouse on a hot summer’s day. This didn’t bode well for a good night’s rest.

After 10 minutes, I decided I had to cool down; Off I went to the bathroom to get some loo roll which I had drenched in cold water, and once back in bed, I plonked the soggy, pulpy mass on my forehead for a bit of relief. This didn’t quite do the trick, so I nudged Mr Grump awake so that he could dab the sopping tissue on my back to try and cool me off.

I had valiantly decided that I was going to go to work, but after failing to summon up any energy, my tired body aching from the hacking cough that had disturbed me so often, coupled with a raging temperature, had me admitting defeat and I phoned in sick.

After another fruitless couple of hours of trying to go back to sleep, I decided to drag myself downstairs to quench my raging thirst, plus I was in need of sustenance, as my appetite was strangely unimpaired by my malady.

The rest of the day has been a series of bizarre bouts of feeling boiling hot, grabbing anything cold I could find to cool my brow, and then cooling off, getting mad bursts of energy, racing around trying to get things done, until the next hot spell kicked in again, where I would repeat the whole process.

In the midst of one of my warmer moments, my daughter arrived home from school looking flushed. Oh, not her coming down with it as well, however with the resilience of youth, she still wanted to go out, but not before she told me ” Mum, my head is really itchy, and I can’t stop scratching.” I carefully examined her head; curiously mine had been itching for a few days as well…..Great, we now have got bloody nits!!!

Mr Grump springs into action, his head is bald and shiny and he is not intimidated by a few measly nits…oh, no! He has grabbed the nit comb, which has been lurking since last time, (one of the joys of having school aged children) and is raking through my daughter’s long thick hair, shouting in delight each time he has captured and annihilated one of the little blighters!

So here I sit, with my cool pack on my head, scalp tingling from the savage combing I endured at the merciless hands of Mr Grump… Isn’t life fun!