This week Linda, in honour of St Patrick’s Day, no doubt, has given us, green for our Stream of Consciousness posts, which can be used any way we choose

It is not looking very green around here at the moment. We have the return of the ‘Beast from the East’ or rather it’s rather smaller, but no less freezing brother, the ‘Mini Beast From the East.’ It seems that the meteorologists were so pleased with the name that they have given the Siberian weather front that visited us and caused utter chaos, that they have decided to recycle it. How very green of them!

It is starting to look rather a patchy white outside where we have had a couple of hours of light snow. It is trying to settle but is not quite robust enough, which suits me just fine. Hopefully, this time it won’t affect the folks in Ireland too much as they were rather overwhelmed with the huge amount of snow they got from the Beast, it caused no end of upheaval. However, knowing how the Irish are fond of a party, I am sure that they are not going to let a little snow get in the way of their celebrations today.

Happy St Patrick’s Day to all that celebrate it! 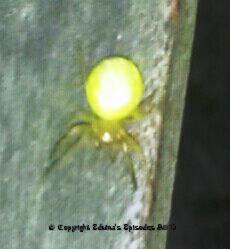 Hugh’s Photo Challenge: Week 3 – What Lurks in the Shadows?

Hugh has gone with the spooky and the scary this week of Halloween for his photo challenge.

The photo I have decided to share with you is a rather hideous spider! As you can see he looks as though he might glow in the dark with that luminous green body. I was informed by The Book Blogger that he could be an orb – weave spider, but to be quite honest, I did not get close enough to him to try to identify him.

At the time of this photo is was back in the summer when I was working at the hospital still. I had gone outside at break with a couple of nurses  and we sat on the ‘smokers bench’. This little fellow appeared, which sent us all off in different directions screaming! Give us blood and gore and we will be there poking about, but show us a spider or a wasp and you won’t see us for dust!

I was brave though as I took the photo (thank God for the zoom feature). The quality of course is not great as I took it as quickly as I could then got out of there!

Now I admit that I am a bit of a wimp when it comes to creepy crawlies etc, and of course now that summer is well and truly on its way, I am going to be constantly nagging Mr Grump to come and deal with any that happen to get in my way!

I have tried to be really careful that I do not pass this trait down to Miss Hap but it seems I have failed. Around 6am this morning when I was eating my breakfast and Mr Grump was out with the dog, she came thundering down the stairs in rather a hurry! This in itself was unusual because normally it takes forever to get her up and motivated on a school day and also she does not like to hurry, especially in the mornings.

It turns out there was a HUGE (her words) spider in her room and I needed to go and get it out immediately. Well I am afraid to say, I wasn’t going! I had already had a run in with a daddy-long-legs that dive-bombed me whilst I was on the loo, and that was far closer than I was going to get to any spiders. Mr Grump was still out, so after 10 mins Miss Hap decided (with my encouragement) that it had probably scuttled off somewhere else and to go back to bed.

At break time today at work, three of us went to sit on the smoker’s bench just by the car park (I haven’t restarted smoking, but way too hot to stay indoors). The nurse sitting next to me on the bench started flailing about screaming, so I jumped up as well as she said something was in her hair!

She managed to flick it off and it turned out to be this little chap. I have never seen a spider like him before. He has this almost fluorescent green body (looks radioactive to me) and was running around all over the place.

I wanted to get a pic of him as he was so unusual but was scared to get too close, so this is the end result which is not very good I know, but you can still see the glowing green bit of him!  Has anyone else seen this weird type of spider.? (Now to us of course, he seemed ENORMOUS but I think he was probably about as big as a thumbnail!