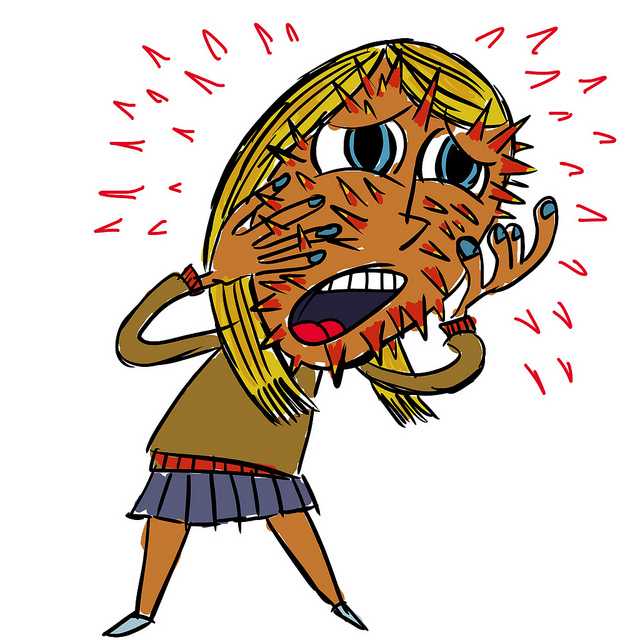 When my dad was well into his seventies, he and my step-mother still tried to live life to its fullest. They went off on all sorts of cruises everywhere, and when they were back at home, were members of various clubs; ‘The Walkers’ club and ‘Munch Club’ speak for themselves but they also belonged to what they referred to as the ‘Recycled Teenagers’ club, where a group of like-minded pensioners strutted their stuff to music and got up to all sorts of mischief.

For me, the teenage years although pretty uneventful are not ones that I would be keen to revisit. The one thing that I didn’t get as a teenager (apart from a bust, which I was very resentful about), was spots.

Yes, I was lucky as many of my peers suffered with dreadful acne that was both painful and soul-destroying for a young image-conscious teen. I escaped with the odd spot once a month and that was it.

So why the hell at nearly 50 years old have I suddenly got 4 spots on my face! All at once, all in the same day. I mentioned that I had a pretty rough day yesterday, but when I got home and took off my glasses, I thought the bridge of my nose was sore where they had rubbed, but no, there was a spot there, its twin had settled just near the corner of my eye, the triplet by the corner of my mouth, and its quadruplet right on top of a small mole I have just under my chin!

Not the most attractive sight in the world but when I asked Mr Grump to look at the one on my nose, he just laughed because it had caused the bridge of my nose to swell up a bit, making me look a little bit odd and distorted (well more than usual anyway)!

I know sometimes as we get older it is said that we recede back to our childhood! What happened to the 40s, 30s and 20s??!!!