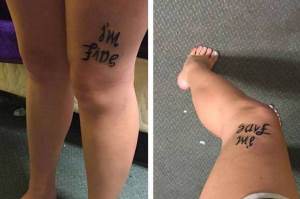 Episode 478: It’s all about Perspective.

I just had to share this story with you which you might have already seen on Facebook as it has been doing the rounds there at the moment.

A 21-year-old woman had her leg tattooed with the words ‘I’m fine’ which is depicted in the picture on the left. Now this might seem a rather odd thing to have tattooed onto your skin, but its message is much more than just those words.

As you can see from the image on the right, the same tattoo read from the woman’s viewpoint reads ‘save me.’ The reason for this is that she unfortunately  suffers from  depression, and although might look fine to others, is actually feeling far from it.

She wanted to show just how appearances can be so deceptive, as a person with depression does not necessarily go moping about with a  sad face! In fact, I know from experience that I have tried to act as normal, cracking jokes and keeping up with conversations, when I have actually just wanted to go home and back into my little ‘cocoon.’

The whole point of her getting the tattoo was to share it publicly, in order to raise awareness of depression and somehow lessen the stigma that is often attached to it. I don’t know what you think, but from my perspective it is a pretty clever way of drawing attention to condition that is so often misunderstood, and not taken seriously enough.